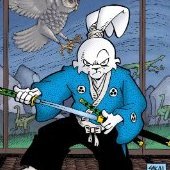 NECA is doing another round of TMNT figure offerings through LootCrate starting off with a 7" movie figure based on the Danny Pennington. Like last year they will be doing a total of 4 sets and if you