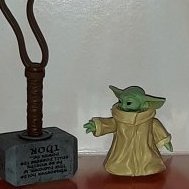 I love it. I dont know why everyone's saying that the weapons are too sci-fi? After all the origional came with a laser pistol that looked like a hair dryer.

I like him. He has some similarities to Napoleon Bonaparte.

Just in from IGN, we have new G.I. Joe Classified Cobra Commander Official Images! This figure should be part of the second wave which IGN says will be out on September 15. We have heard reports the w