As long as there are chips and dip left, I got no problem being the last guy to the party. 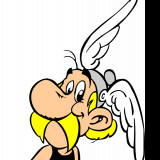 Right there with you. That price-point's gonna sting, but Mako MUST have!